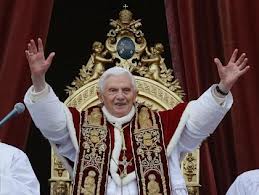 The Catholic Church is taken by suprise today by Pope Benedict IV announcement of his  resignation as heeadof the catholic church  with immedeiate effect.

In more than six hundred years, no Pope had resigned their post head of the Catholic Church and would remain old in office until their death but Pope Bendict said in a tape releaased by  Vatican radio 85 year- old Pope Benedict IV said  “in today’s world, the job of the Pope requires strength and  I no longer have  the  strength to perform the job of the Pope and head of the Catholic Church”.