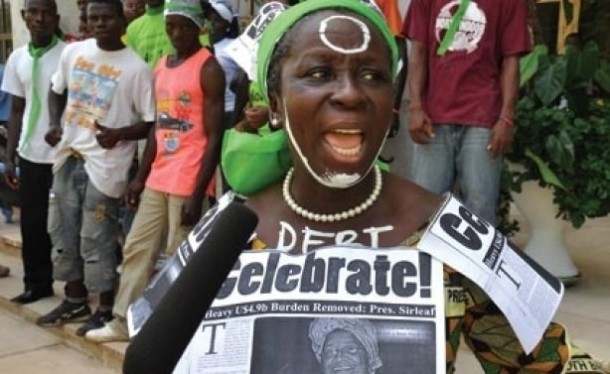 After a very prolong and ignoble reign as chief and head of the Monrovia municipality, Liberia’s capital, Mayor Mary Broh and staunch stalwart of President Ellen Johnson-Sirleaf , was forced out of office when she tendered her resignation this weekend to the Liberian President.

The former Monrovia City Mayor, a city named after former United States President James Monroe, forced resignation was precipitated on her latest run in with the first branch of the Liberian government, the Legislature which issued a

Writ of summon for contempt and obstruction of its powers when she led a group of mob, many of whom are sympathizers of the Sirleaf’s administration, prevented the Sergeant-At-Arms of the Liberian Legislature from serving a warrant of arrest on the Superintendent of Montserrado County, Grace Kpan (equivalent of governor), from being arrested for contempt for failing to appear before them to answer questions of allegation of misappropriation of public funds.

The former City Mayor challenged the Legislature’s contempt writ of summon and refused to appear before that body, a stand-off which subsequently created a cacophonous chaos in the country as the Legislature implored the President to choose between ‘the rule of and the country or ‘her friends’. Vice President Joseph Boakai in an effort to mitigate the tension, suspended the ‘all powerful’ Mayor for time indefinite after consultation with the Liberian leader, President Sirleaf who was attending her next door’s neighbor, Sierra Leone Presidential inauguration.
Days after her summon, the former City Mayor went to the Liberian Supreme Court to challenge the Legislature’s action against her but escaped near-death from angry mob that was at the Supreme assaulted her, furious that she put herself above the law by obstructing and defying the first branch of government.

Mayor Broh is no stranger to face-up with the Liberian legislature and controversy. The former Mayor who came to prominence when she led the passport division at the Liberia Foreign Ministry where she as accused of bruit and ruthlessness though she was credited of straitening up that division. She was reshuffled over to the metropolitan city of Monrovia as City Mayor. Though she is attributed to the cleanliness of the city, her ruthless and insipid style of leadership embraced an ironfisted governing.
The all-powerful city Mayor ultimate downfall must have come from the backdrop that it is too an overbearing of habitudes from one loyalist, the President Sirleaf had to let go a loyal and faithful protégé.

Mayor Broh’s legacy at Liberia’s largest metropolitan city will be clouded by controversies and dossier of rabbit punches left on the horizon of Liberia, some of which include but not limited to;
-leveling of packing ticket which created tension between her city hall and the Legislature.
– Arbitral arrest and detention of a mother and baby
– Lawlessly inflicting medieval justice and a military style ‘push-ups’ punishment on ordinary citizens in public without due process
– Arrest and detention of journalists for walking towards the very street she was touring at the time
– Unilateral demolition of homes and businesses
– Burning down of businesses she deemed in violation of building and zoning codes.

The citizens of the metropolitan city of Monrovia had for long cried out for Mayor Broh to step down but was always protected by the Liberian leader who is a close friend to the President and among the few powerful public officials who considered themselves ‘untouchable’ and above the law.