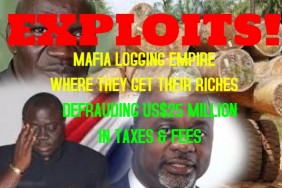 Global Witness 2017 Report  “all of Liberia’s large logging contracts are fundamentally illegal, a fact that if not addressed
immediately could undermine the important work being undertaken by the government and its partners to ensure
Liberia’s forests do not again fuel conflict and corruption”.

The report confirms that as the result  of these logging concessions operating illegally, they’re defrauding the country of over US$25 million in taxes and fees which constitute five percent of the country’s national budget, plundering 10% of the country’s land mass which  their illegal logging operations cover, destroying the only remaining rain-forest of West Africa and disregard to deforestation and environmental degradation the local communities  and people  suffer where they operate their illegal logging activities.

Global Witness 2017 report on the state of the Liberian logging and forest affairs uncovered evidence demonstrating that these
“logging companies are illegally owned or controlled by politicians such as House of Representatives members Alex
Tyler, Moses Kollie, and Ricks Toweh”.

“In January 2017, Global Witness received a letter from International Consultants Capital-ICC, owned by Representative Alex Tyler and Moses Kollie, denying that these legislators are owners of the company”, the report reveals, contrary to records Global witness uncovered at the Foreign Ministry where the article of incorporation of ICC shows the two law lawmakers and a politician, MacDonald Wento  and Willie who is standard bearer of the United People’s Party (UPP)  and Willie Mulbah are owners of the company and lifetime board members- together, they own several concession contracts and logging companies.

Global Witness report discovered  evidence that these” illegal logging companies are employing wartime loggers like the notorious
Gabriel Doe, have manipulated the country’s lauded log tracking system, and are exploiting licenses designed to
help communities manage their forests and not helping the country benefit from its forest”.

Global Witness’ findings earlier in January 2017, reveals the Forestry Development Authority, under the management of Mr Harrison Karnwea, now Vice Standard Bearer of one of Liberia’s 26 opposition parties  which oversees and is  custodian of logging concessions and companies, denied logging companies were awarded or operating illegally but that the “FDA was committed to enforcing the laws”, a myth from evidence discovered.

The Global Witness report finds that  “Representatives Alex Tyler and Moses Kollie have several logging licenses, operating several companies and failed to report their ownership of these companies and holding logging contracts as required by law meant to demonstrate the importance of public beneficial ownership reporting under the 2016 EITI Standard” which guarantees Liberian citizens not feel confident that their resources are being managed free from corruption” if they discover that, despite governments’ pledge to force ownership reporting.

In a reply to Global Witness by the Forestry Development from a letter from Hon Harrison Karnwea, then Managing Director, on query of the Executive Order issued by President Sirleaf on concession to curb the illegal operation of logging companies, the FDA’s Managing Director told the international watch group that the President’s Executive Order had expired though there was no time frame given for the lifespan of the Order or a law restricting the lifespan of Executive Orders, the report finds- meaning Mr Karnwea unilaterally determined the expiration of the Executive Order issued by President Sirleaf..

Global Witness is recommending among other things, the Liberian government cancels all concession contracts.

Representative Alex Tyler is also entrenched in a mining scandal, the Sable Mining concession in which he has been accused of corruption, extracting huge sum of money from the owners of the concession in bribes and has since been impeached from his post as Speaker over the scandal but continues to be a Representative and was arrested and   indicted   and trial pending.

Representative Tyler, who previously formed his own political party to contest for president in October this year, later joined the largest opposition party, leaving the ruling Unity Party for the biggest opposition party, Coalition for Democratic Change-CDC, carrying over his massive logistics comprising of fleet of luxury vehicles.

The lawmaker also built a huge mansion and is believed to be one of Liberia’s richest citizen, wealth accumulated in a short period of time after entering government.

For  Mr MacDonald Wento, he has taken over the United People’s Party,  an opposition party of the late Baccus Matthews, regarded as father of the country’s multiparty democracy  as standard bearer  for the party in the country’s October 10th  election and grass-root champion of the cause of the ordinary citizens but this time astonishingly, the part is being headed by a standard bearer who exploits the very people and country Mr Matthews and the UPP fought for.